A blind test between sixteen bourbons of different proof, quality and price. That was the pre-sets for another great Saturday night whisk(e)y tasting. The results were both anticipated and surprising. Here’s the rundown.

Me and my friend did another blind whiskey tasting (we did a Bowmore shoot-out previous to this one [link to article]) and this time it was with 16 different bourbons. The main reason for doing these shoot-outs is to educate ourselves on the nuances in taste and smell between different distilleries and variations, and to find out what we really like when all confounders are removed.

I’m Swedish, and in Sweden spirits are sold through a government controlled chain of stores that all work from the same platform. This means that they all have the same selection to choose from, and the stores stock up on what people in the area buy. The good thing is that you can order from their entire catalogue and have it shipped to the store of your choice. The bad thing is that you’re confined to their chosen selection. If you are an avid enthusiast like me, this means that you are, and feel, somewhat restricted to what they offer.

When it comes to bourbons, they only offer 38 different bourbons (comparison: they offer 1092 different malt whiskies). So, if you wonder why the selection looks like it does, it’s because I tried to create a diverse, affordable tasting from a pretty narrow selection base. Two of the bourbons are not available in Sweden, I got them from Germany (Booker’s Bourbon 2018-01E and Heaven Hill Old Style Bourbon).

The list in the photo is sorted by ABV, to show how I tried to make the list interesting, and harder to figure out, by including four whiskies from four different ranges.

The favourites and the dislikes

Going in to this I had three favourites that I thought was above the others both in smell and taste. My top choice would be Wild Turkey Rare Breed, closely followed by Booker’s Bourbon 2018-01E “Kathleen’s batch”. They are high proof, perfectly balanced bourbons that ticks all the right boxes for me. The last one was Woodford Reserve Distiller’s Select, which to me was very interesting and a little bit different than the standard bourbon.

When it comes to my friend, who favours sherried islays, but also loves whisky in general, this was almost (we all have had bourbon as a fast vehicle to drunkenness somewhere in our youth) the first time he tasted bourbon. This gave him a crash course into his likes and dislikes in the bourbon whiskey genre. It’s not every day you get to try 16 new whiskies in a new and unexplored category.

The method and the preparations

If you are interested in how we prepare, and which method we use to make this a truly random test, the full rundown can be found in paragraphs 2 and 3 in [this article]. We did the same thing this time. The short version is that we randomize 16 samples into 4 brackets. The four winners of those move on to a final bracket, and then the best whiskey is chosen. The four whiskies in the final aren’t necessarily the four best ones, but the winner will be the one that stands out. 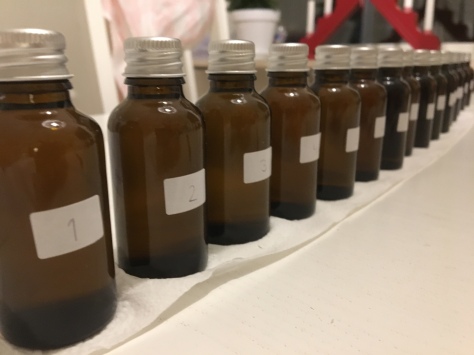 Reflections
The first bracket offered two of my favourites. There was no question though; The Wild Turkey Rare Breed stood out like a clear winner for the both of us and so did Heaven Hill Old Style Bourbon, but on the reverse side of the spectrum. It seemed very “chalky” and watery compared to the other three and ended up deservingly in our last places. We disagreed on the middle ones, where I put Woodford Reserve Distiller’s Select as my second choice and my friend chose Bulleit Bourbon. This was satisfying in regard to Woodford Reserve being one of my favourites going in to this shoot-out. But as an afterthought, it probably wouldn’t have made the finals no matter which of the final bourbons it was up against. At best a fourth place, would be my guess.

Reflections
This one baffled me quite a bit. The Peach Street Distiller’s Colorado Straight Bourbon just shined like a star amongst the others with a very different taste profile. It makes sense though, being the only one not made in Kentucky. It stood out in a very good way, but there’s no way that I would have said that it was a better bourbon than Four Roses Single Barrel prior to this exercise.

The other results were almost as one would expect. John Lee, the cheapest of the bunch fell short and the Four Roses Single Barrel came in second for me and on top of my friend’s list. The most interesting thing about this bracket, except the fact that Peach Street Distiller’s Colorado Straight Bourbon won my bracket, was that my friend really disliked the Jim Beam Double Oak. According to him it was the only undrinkable whiskey in the entire shoot-out. This is interesting because 5 out of the 16 bourbons are Jim Beam products. But this one really didn’t sit well on his palate.

Reflections
This bracket was very straight forward and ended up just as expected for me. Knob Creek Small Batch won by a fair bit followed by Four Roses Small Batch. To me, Four Roses bourbons are a bit too far out on the sweet side. It works in the Single Barrel, but in the standard Yellow Label and in the Small Batch, the sweet honey and brown sugar notes make up too much of the taste. My friend put the Four Roses Small Batch last, which was a bit surprising.

Reflections
There’s really not much to say about this bracket. Our lists were the same and Booker’s Bourbon 2018-01E Kathleen’s Batch won fair and square. The taste explosion that is carried by 6+ years in new oak and bottled at high proof is fantastic. If you try to match it with 3 “standard” bourbons it’s going to stand out like a delicious sore thumb.

What is interesting though, is that both me and my friend preferred the Jim Beam Original over the Jim Beam Black – Extra Aged. One would think that extra time in a barrel and a slightly higher proof would make the Black a safe bet in a one-on-one race. Taking the fact that my friend really disliked the double oak, maybe there’s a red thread to be found. Then again, it could just be the companion whiskies in the same bracket that made it worse than it actually was.

Reflections
The results are almost as expected. The four high-proof, more expensive whiskies were all represented, except for one instance. The Peach Street Distiller’s Colorado Straight Bourbon replaces the Four Roses Single Barrel in my final line-up. It’s not cheap by any means, but it’s “just” 46 % ABV, compared to the others that are 50 % and above.

If we start by looking at my favourites going in to this bracket, two out of three made it, and the Woodford Reserve Distiller’s Select fell short and lost to, what used to be my absolute favourite, Wild Turkey Rare Breed. It’s always good when you confirm that it’s the palate and not the confounders that makes a whiskey great. Booker’s Bourbon 2018-01E Kathleen’s Batch had a somewhat easy bracket, and it was no question it deservingly ended up in the final line-up.

Before addressing the obvious fact about my winner, let’s take a breather and look at my friend’s result. To end up with that result testify that he’s used to drinking whisky (to recognize the flavours behind the high proof) and that he’s got a palate to match. Of course, it’s not true that those are better whiskies, but in general terms they are widely accepted as higher quality. In list comparisons, it’s interesting to see that the three whiskies we share in our finals, we have in the same order as well. Remember that this is done blind, so there’s no way to know the picks until everything is done.

So, let’s discuss the fact that a Colorado bourbon beat all its Kentucky brethren on my list. It clearly won and it was the best smelling and tasting whiskey to me. I think. Maybe it’s stupid to second guess one self, but there’s still a part of me that wonders if it won because of how different it was and not just by its quality alone. It tastes nothing like the others, which surely helped it to the top. Prior to this shoot-out I hadn’t put it side to side with another bourbon to see how it held up. Either way, it’s a fantastic whiskey.

If you made it this far, thanks for reading and make sure to do this yourself. I never in a million years would have expected bourbon vary in such a way it does. The only way to find out unbiased is to do blind tastings.

Up around the blends – The Affordables

PEAT POWER: THE BATTLE OF ISLAY

A Visit to the old Jameson Distillery

For the love of all things whisky/whiskey